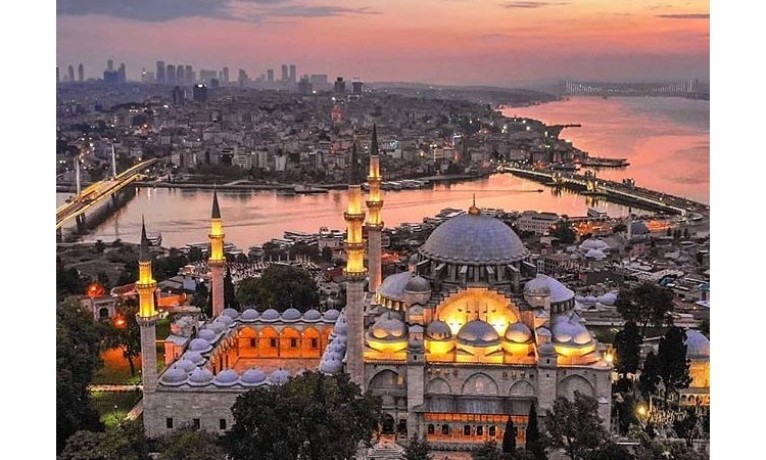 Historic Place on the European Side Hagia Sophia Hagia Sophia is one of the most important monuments in the historical peninsula of Istanbul. Built in the Byzantine period as church and then as cathedral, the Hagia

Historic Place on the European Side

Topkapi Palace
Topkapi Palace, one of the most important buildings dating from the Ottoman Empire, is located in the Sarayburnu district of Istanbul. The palace, which was used as administrative center for 400 years in the Ottoman Empire, was built in 1478 by Fatih Sultan Mehmet. In the palace where the personal belongings of the sultans who spent time in the palace were displayed during the Ottoman Period. Muhammed\’s cardigan, beard, footprints, Hz. Abraham\’s pot, Hz. Moses\’ wand, the Prophet. David\’s sword, Hz. The Holy Relics Department, where important relics such as Yusuf\’s robes, were found, attracted great attention.

Suleymaniye Mosque
Suleymaniye Mosque, one of the most important examples of Ottoman Architecture, was built by Mimar Sinan on behalf of Sultan Suleyman I between 1551-1557. Located in the Fatih district of Istanbul, the mosque, madrasahs, library, hospital, bath, imaret consists of structures such as. Süleymaniye Mosque, which has an extraordinary beauty with its tiles and diamond ornaments inside it, is known as the work of Mimar Sinan\’s journeyman\’s journey.

Grand Bazaar
The Grand Bazaar, one of the most touristic places in Istanbul, is one of the first shopping centers in the world. The first section of the bazaar, which is located between Beyazıt Mosque and Nuru Osmaniye Mosque, was built by Fatih Sultan Mehmed in 1460. Later, the Grand Bazaar, which was gradually expanded, reached almost 4 thousand stores on 65 streets. The market is still one of the most visited places in the world, with a wide variety of products from handmade goods to clothes, food, goods.

Galata Tower
The Galata Tower, one of the oldest towers in the world, was built in 528 by the Byzantine Emperor Anastasius. The building, which was originally designed as a lighthouse, was used as a shelter in the Ottoman Period and as a fire observation tower. The Bosphorus and the Golden Horn are included in the UNESCO World Heritage Temporary List in 2013.

Dolmabahce Palace
Dolmabahçe Palace, one of the most eye-catching buildings of the Bosphorus, is one of the buildings dating from the Ottoman Empire. The palace, which was built by Sultan Abdülmecid in 1839 by the Balyan family, looks at each other with beautiful decorations, unique paintings and unique works. Dolmabahçe Palace, which was used by Atatürk in 1927-1938, has been used as a museum-palace since 1984.